I think some people move to New York City and within a week call themselves “New Yorkers.” I’ve been here for nearly 20 years, and yet when someone asks me where I’m from I still answer “I live in New York City, but I’m from Lewisburg, Pennsylvania.   I grew up in Amish Country, and spent my childhood viewing the USA from the back of a 1979 Volkswagen Camper Van. I’m pretty sure I left my heart somewhere on the interst 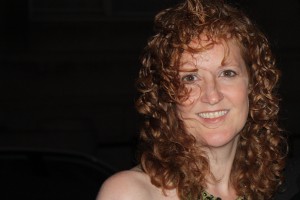 ate. Perhaps it’s no surprise then, that my first book, Hometown, a sweet and funny contemporary Amish romance from The Wild Rose Press, is set among the green ridges of Central, PA.  And I don’t think it’s much of a stretch to say that one of the main characters is the 1979 poptop van driven by our heroine.

As an actress, have played saucy maids, longsuffering spinsters, and quirky leading ladies on and off-Broadway and at regional theaters around the country.  I said “One cheesecake, two forks” on an episode of “The Big C”;  counseled an incarcerated Jessica Biel as former-meth-addict Brenda on “The Sinner”; and Rick Sordelet (Broadway’s premier fight director) once told me I drove a cop car as well as any stunt woman.

After reading to my daughter every night for nine years, I began narrating romance novel audiobooks in my home studio.  Between acting jobs I have taught Shakespeare to kids as a teaching artist, conducted social media for a 5K charity run called Rafi’s Run, and answered fan mail for a children’s book writer.  I live in Upper Manhattan with my very patient husband Peter, my 12-year-old daughter Cate, and our Maine Coon kitten, Tessa.